Within an Active Directory, services can be used by users. Sometimes these services need to contact others, on behalf of the user, like a web service might need to contact a file server. In order to allow a service to access another service on behalf of the user, a solution has been implemented (introduced in Windows Server 2000) to meet this need : Kerberos Delegation.

In order to understand what is Kerberos Delegation, let’s take a concrete example. A web server with a nice interface allows a user to access his personal folder, hosted on a file server. We are in the following situation :

The web server is front-end, and it’s this web server that will fetch the information instead of the user on the file server in order to display the content of a file, for example.

The ability to relay credentials can be given to an account with at least one SPN attribute set. It could be a computer account or a service account.

With Unconstrained Delegation, the server or the service account that is granted this right is able to impersonate a user to authenticate to any services on any host. 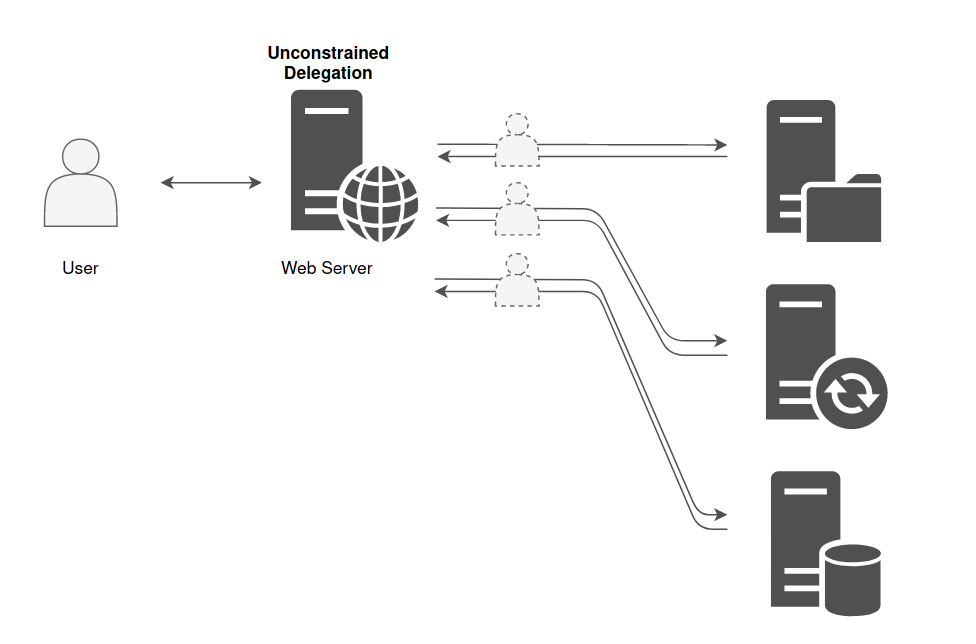 Here is an example, in my lab, of a machine that is in Unconstrained Delegation : 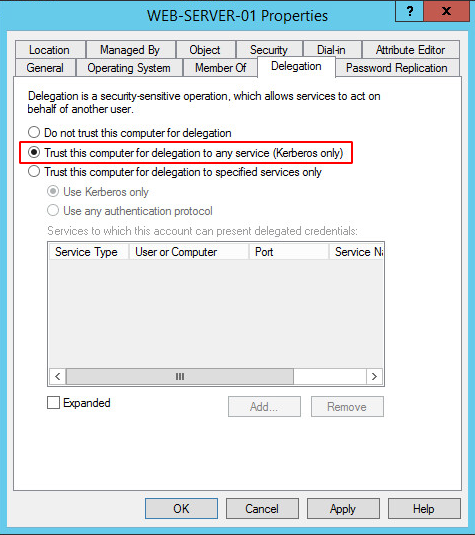 It is historically the only choice there was when the delegation principle was introduced. But for obvious security reason, Constrained Delegation has been added.

If a computer or a service account has the Constrained Delegation flag set, a list of authorized services shall be associated to this flag. For example, in previous example (web server and file server), the web server will have the Constrained Delegation flag indicating that this account can only impersonate some users against CIFS service hosted by SERVER01, the file server. 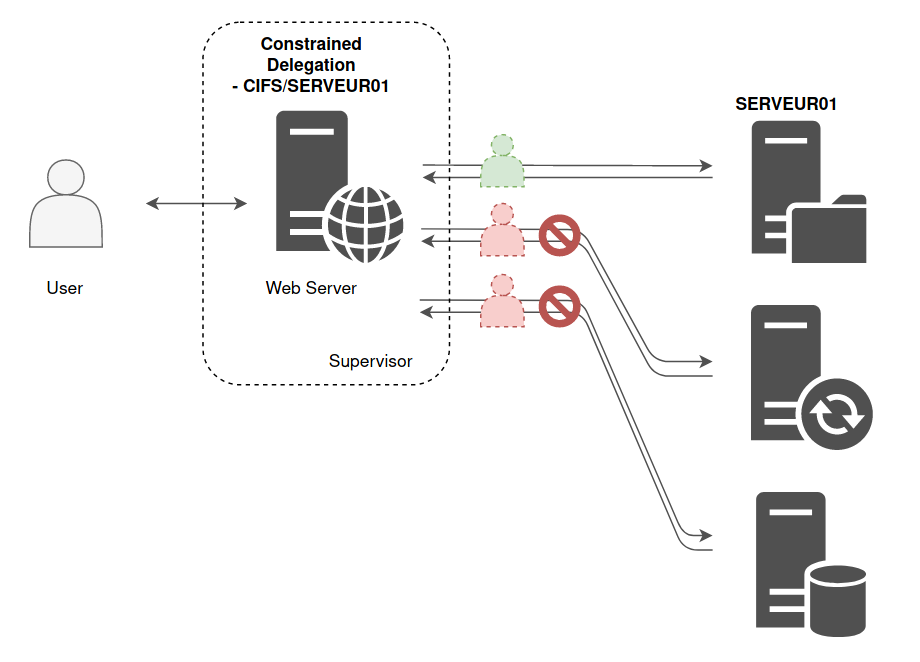 In other words, the Domain Controller will read the SPN list on this account, and will decide: “This account is allowed to impersonate a user, so he can authenticate against one of these services on behalf of the user”. 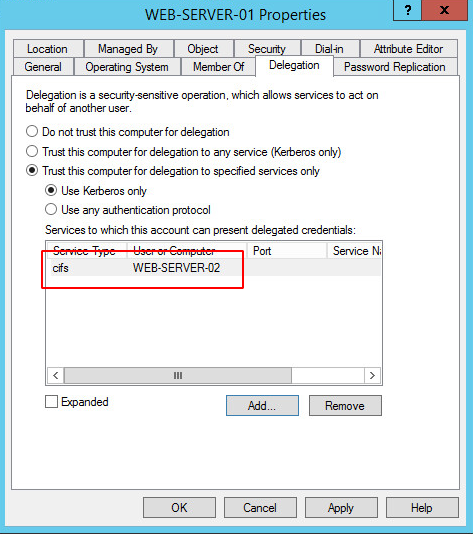 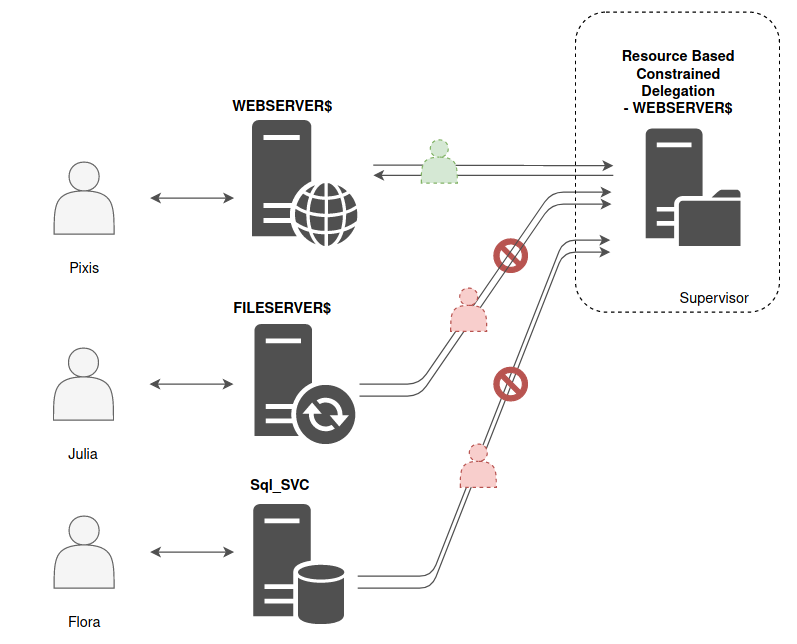 The responsibility is shifted, it’s at the level of the resource that receives the delegated authentications that the information of whether or not the delegation is accepted is found.

In other words, it’s the end resource that says “I allow this list of account […] to authenticate to me on behalf of someone else”.

Now that the high-level behavior is understood (at least I hope so), let’s go into a little more detail about this process. Concretely, how can a machine or an account can pretend to be a user when using a resource ? That’s what we are going to see now. Details between every different techniques are relatively different, that’s why each of them will be explained separately. Stay close on your seat, it’s gonna get dirty.

As seen before, in this case, the server or the service account can authenticate on behalf of the user to any other services. For this to be possible, two prerequisites are required :

Once set, we can list UAC flags and check that TRUSTED_FOR_DELEGATION has been set. 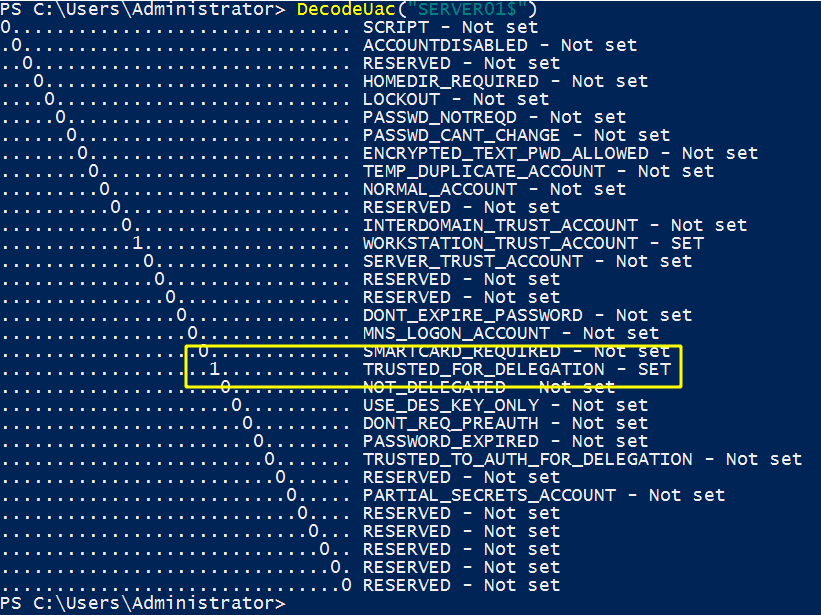 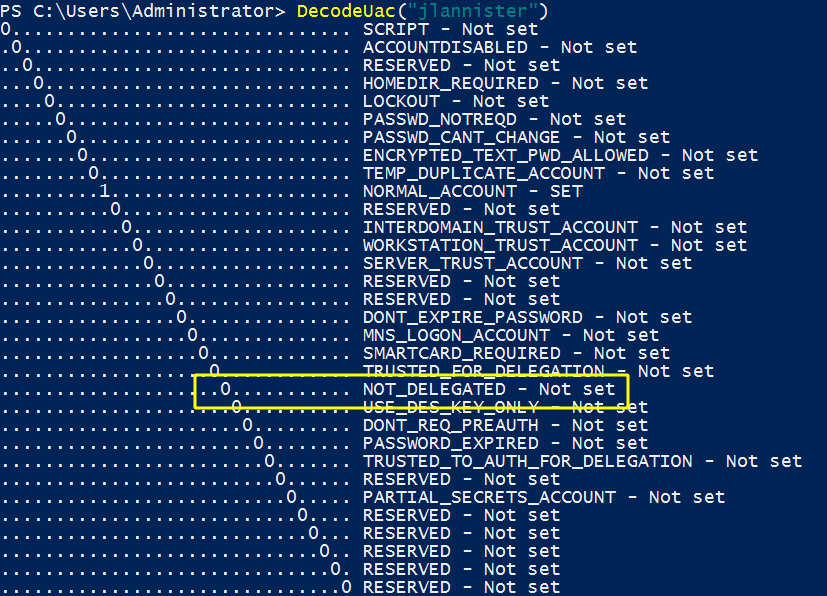 Concretely, during exchanges with the Domain Controller as described in the Kerberos in Active Directory article, when the user asks for a TGS (KRB_TGS_REQ), he will specify the SPN of the service he wants to use. It is at this point that the Domain Controller will look for the two prerequisites :

If both prerequisites are met, then the Domain Controller will respond to the user with a KRB_TGS_REP containing standard information, but it will also contains a copy of the user’s TGT in his response, and a new associated session key. 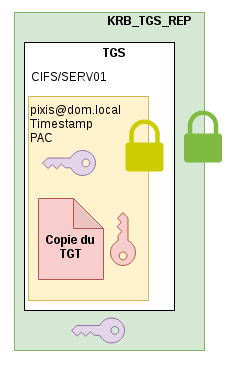 Once in possession of these elements, the user will continue the classic process by sending a request to the service (KRB_AP_REQ) by sending the TGS and an authenticator. The service will be able to decrypt the content of the TGS, verify the user’s identity by decrypting the authenticator, but above all it will be able to retrieve the copy of the TGT and the associated session key, in order to pretend to be the user at the Domain Controller. 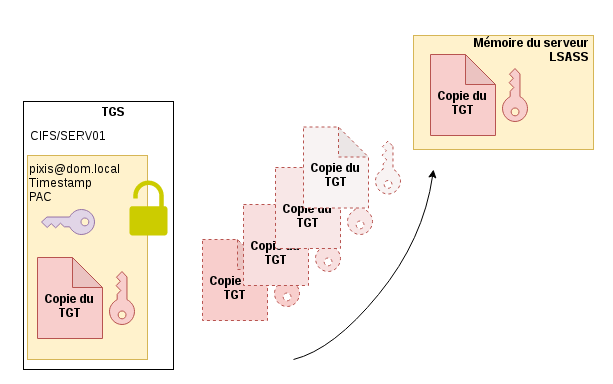 Now in possession of a copy of the user’s TGT and a valid session key, the service can authenticate to any other service on the user’s behalf by requesting the TGS from the Domain Controller, by providing this TGT and by encrypting an authenticator with the session key. It’s the Unconstrained Delegation principle.

Here is a summary diagram : 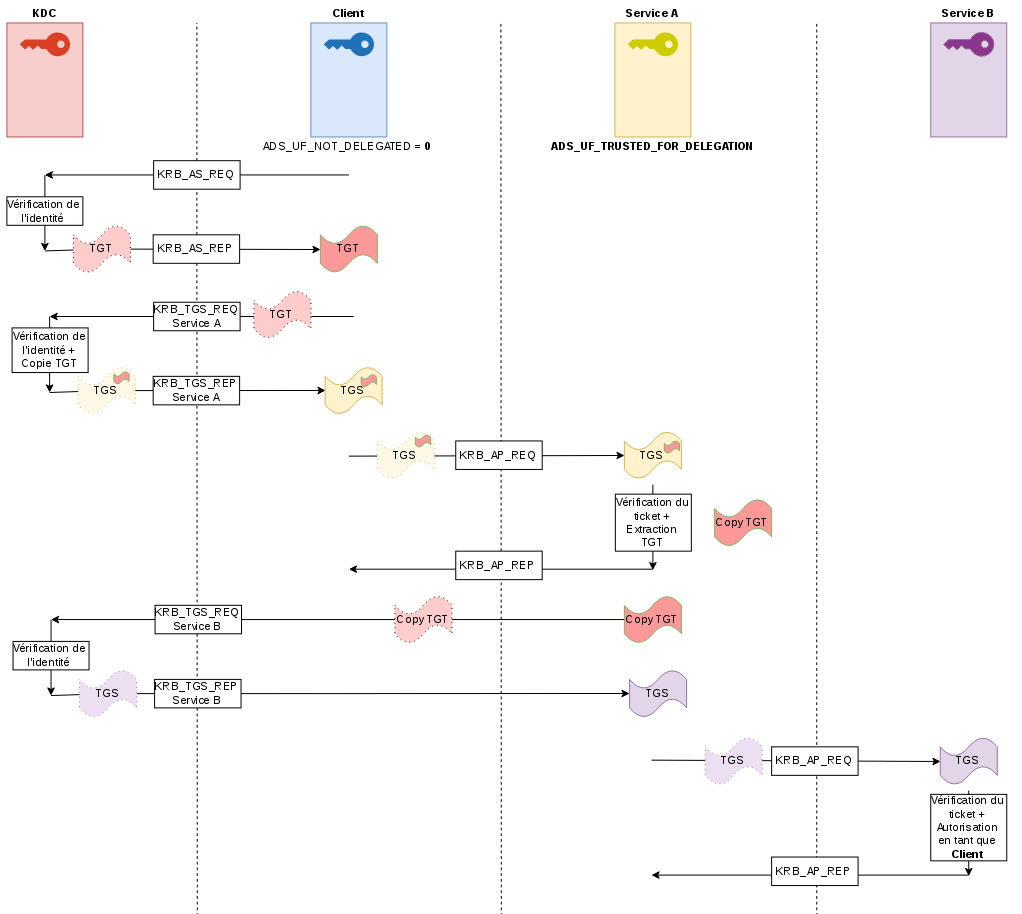 For the Constrained Delegation, a list of SPN or of authorized accounts will be provided to indicate the services/accounts accepted for the delegation. Therefore, the process is not the same. The service involved will not be in possession of the user’s TGT, otherwise there is no way to control service’s authentication. A different mechanism is used.

Let’s consider the case where the user authenticate to Service A and then this Service A has to impersonate the user to access Resource B.

The user makes a TGS request, then sends it to Service A. Since this service needs to access Resource B as the user, it will request a TGS to the Domain Controller on behalf of the user. This request is governed by the S4U2Proxy extension. To tell the Domain Controller it wants to authenticate on behalf of someone else, two attributes will be defined in the KRB_TGS_REQ ticket request:

It is during this request that the Domain Controller, upon seeing this information, will verify that Service A has the right to authenticate to Resource B on behalf of the user.

In the classic Constrained Delegation case (when delegation information is located in Service A), this information is found in the msDS-AllowedToDelegateTo attribute of the requesting account, thus of Service A. This attribute specifies the list of authorized SPN for the delegation. 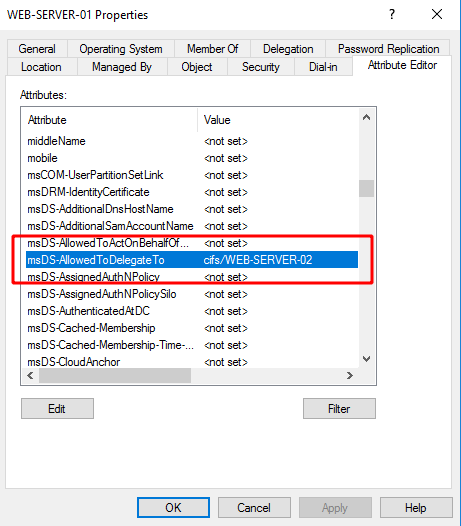 If the targeted SPN is present, then the Domain Controller sends back a valid TGS, with the name of the user, for the requested service. Here is a summary diagram :

This time, the Domain Controller will look at the attributes of Resource B (instead of Service A). It will check that the account associated with Service A is present in the msDS-AllowedToActOnBehalfOfOtherIdentity attribute of the account linked to Resource B.

In order to set up RBCD on a resource, we need to use powershell.

WEB-SERVER-01 is added to WEB-SERVER-02 trusting list, so msDS-AllowedToActOnBehalfOfOtherIdentity is updated.

Then, when a service wants to access a resource, here’s how it works:

As the diagram shows, the technical functioning is similar to classic constrained delegation, however the responsibilities of each entity is radically different.

If you are still there and you are not lost, you should have noticed that we haven’t touched on the notion of protocol transition in this article. Indeed, in the explanation of constrained delegation, we assumed that Service A had a service ticket coming from USER, which was added in the additional-tickets field of the TGS request (S4U2Proxy). But sometimes the user may authenticate to the server in other ways than the Kerberos protocol (e.g. via NTLM, or even a Web form). In this case, the server is not in possession of the TGS sent by the user. Thus, Service A cannot fill the additional-tickets field as it did in the case described above.

That is why there is an extra step, possible through the S4U2Self extension, that Service A must perform. This step allows it to obtain a TGS for a user arbitrarily chosen. To do this, it makes a classic TGS request (KRB_TGS_REQ) except that instead of putting his own name in the PA-FOR-USER block (present in the pre-authentication part), it puts the name of a user it chooses. 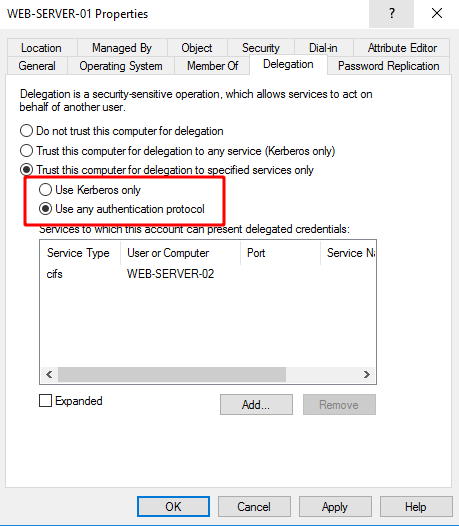 In the first case, the TRUSTED_FOR_DELEGATION flag is set on the account, and the service can only relay kerberos authentication. It cannot use the S4U2Self extension to create a ticket out of nowhere.

In the second case, the TRUSTED_TO_AUTHENTICATE_FOR_DELEGATION flag is set. If this is the case, then the service with this flag can pretend to be anyone when accessing services in its list via the S4U2Self extension.

This diagram is getting a little bit more complicated, but I hope it remains relatively clear. 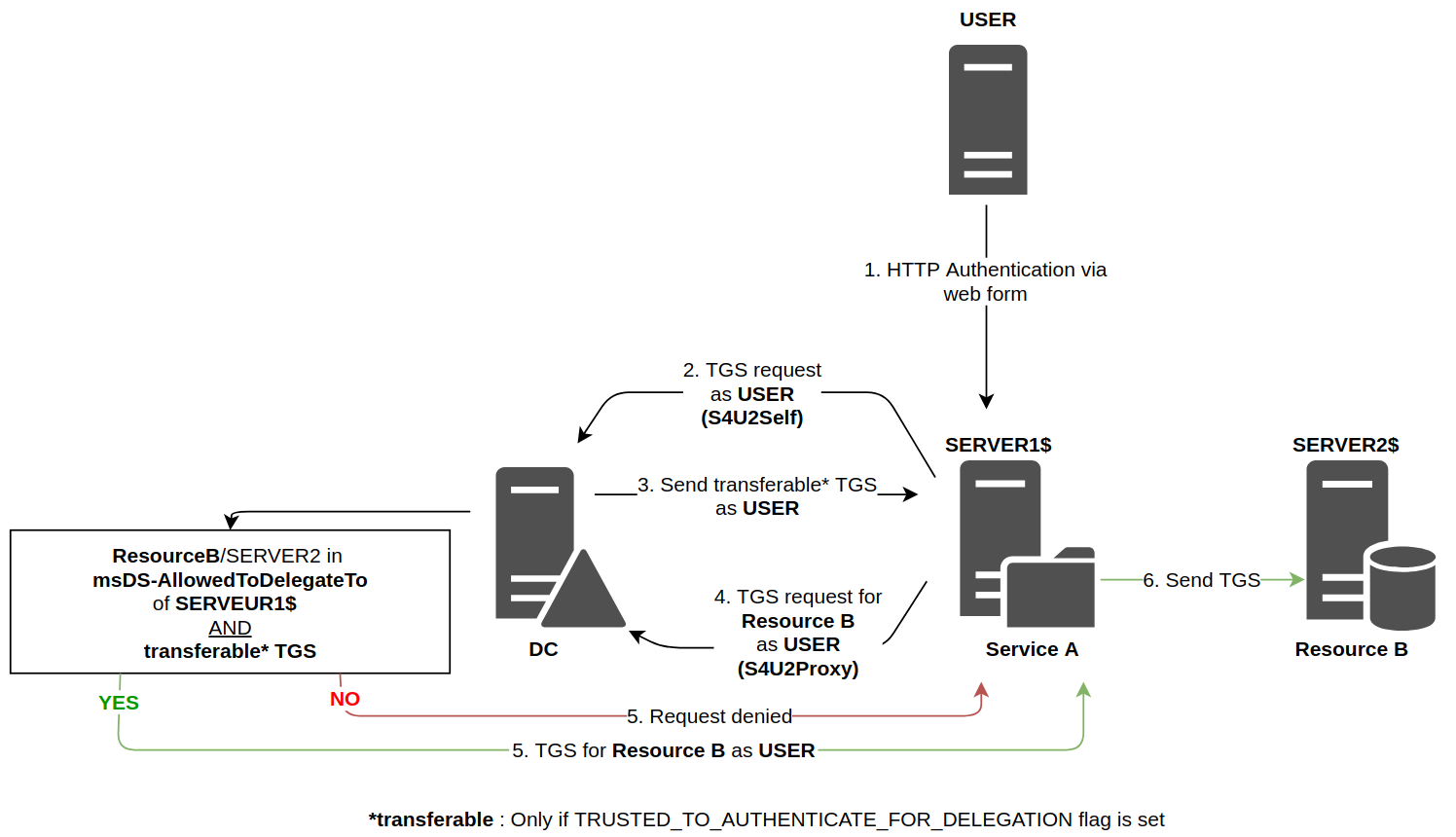 If such an account is compromised, then all services to which that account is entitled to authenticate via delegation will also be compromised, since the attacker can create service tickets on behalf of arbitrary users, such as administrators.

I was thinking of doing an article that would describe kerberos delegation as well as associated attacks, however the explanations are much more dense than expected, so this article remains devoted to explanation. Associated attacks will be presented in other articles.

To sum up, there are three types of delegation:

If you have any questions or suggestions, do not hesitate, I’m all ears.

Big thanks to them for their clear explanations.